That's What I Get

October 28, 2015 at 8:06am ·
I just wanted to show a little school spirit, fit in, for Pink Out. Yeah, after nearly blinding myself with pink false eyelashes and attempting to spray pink stripes into my hair, I now know the meaning of physical comedy. Also, failure.

I was new to the school, I knew no one, I spent most of my time in the library alone, like a hermit and only partially because I like to be alone. Only I decided maybe I wanted to try something new - another lesson learned; don't try something new.

My moment of opportunity arrives in the form of Pink Out, a breast cancer awareness event where the staff and students wear as much pink as possible. I looked at photos from years past and I'm telling you, it looks like a Pepto Bismol sponsored Halloween. Halloween I can do. So I buy some hot pink "easy application" false eyelashes and a can of pink hair spray paint.

The morning of Pink Out comes and I sit down to do my hair. How hard can it be? It's spray paint and I've been doing my own hair for a good bit now, I've got this. Ten minutes later my right hand is dripping pink which is confusing being that my right hand is holding the can and therefore zero paint should be there. My ears, neck and both sides of my face are pink. My hair though? Not pink. And now the can is empty. Perfect.

Fine, it's time to put on the "easy application" eyelashes.

Easy my candy mother truckin' ass! There was a moment I wasn't sure I'd ever be able to see again. Some adhesive had gotten in one eye and I wasn't entirely sure the whole damn thing wasn't lodged in there judging from the inconceivable pain I was experiencing. The adhesive had proven its capability by cementing my other eye shut completely and seemingly irreversibly in a most frightening way..

So there I am, flailing around on the floor trying in vain to get up to run to the bathroom but my body won't do that because all of the energy and intelligence is being concentrated on the fight part of that pesky involuntary Fight or Flight response. I'm telling you, I simply cannot remove my hands from my eyes to use them to get up from the floor. My legs are at least trying to run but only succeed in propelling my body in useless circles on the carpet. My hair dryer, brushes, and make-up are being sent airborne into walls and mirrors. Out of my mouth comes a sound not unlike a hysterical Capuchin monkey yet not one of the other three people in this house hears this and comes to my rescue. People, whom I might add, are all supposed to be awake and alert and preparing for their day so I ask you, what the fuck?

Most of the rest is a blur but I managed to get one eye open, one elbow/forearm down on the floor to launch myself and run, pinballing myself between the walls along the way, to the bathroom. Much soap and water was used and in the end I went to school pink, just not the way I intended; My skin and eyes pink from all the scrubbing.

And no, nobody noticed.  I'm still not over it really.
No comments:

Lest you think I only write about homeless animals and my delinquent offspring, I've decided that being a writer might mean I should share other stuff I've written. Now while that thought fills me with a panic normally reserved for terminal illness diagnoses and career ending pink slips, it's time to suck it the hell up and just do it already.

Who Put My Kids On TV?

Jeeesus, y'all, this presidential debate is killin' me. As a mom, I want to put these two in a get-along-shirt.

Take a second to appreciate that image. I'll wait.

It's very gratifying, isn't it? I know! You're welcome.

I sit here imagining how I'd parent Donald and Hillary and then I realize I am, kinda. I mean Aidan and Asher act roughly the same way those two do and I'm the equivalent of Chris Wallace in their lives. They interrupt each other all. the. time. Aidan blames Asher for shit he couldn't even possibly be responsible for. When Asher is losing an argument he resorts to name calling and tantrum throwing. They'll both turn on me viciously for interfering in one of their battles and they've both been known to flat out fold up their arms, glare at one another and refuse to admit fault in any form.

Mr. Wallace and I should have coffee some day while the kiddos have a playdate. I think we'd have a lot in common.

That's Not How It Goes

The Brute has a way with words. One day he was wrestling around with the boys which led to one of them getting hurt and running away crying, the Brute calling out after him, "You mess with the horns you get the whole bull!"

I tell him, "Honey, that's not how it goes. It's 'mess with the bull you get the horns'.

He, of course, argues claiming "That makes no sense. The horns are just a small part, the big ass bull is the scary part."

Eventually I gave up and now he says it all the time. Even in front of other people.
No comments:

Cox Made Me Do It

If I go absolutely bat shit crazy, it's all Cox Communication's fault.

Oh my fucking gawd, y'all!

We returned our cable modem because we bought our own. Turn in their modem, cancel the monthly rental fee, manage our own modem. Should be pretty simple, right?

You wish. Again, you don't care but we wish.

Within an hour I have this pop up on my browser. Interrupting some hard core Pinteresting, I might add. 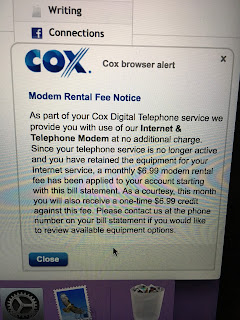 This is the point when a real person gets on the phone. 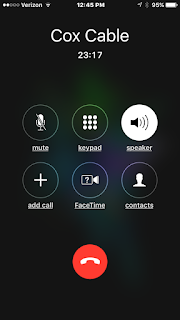 And it takes them to this point 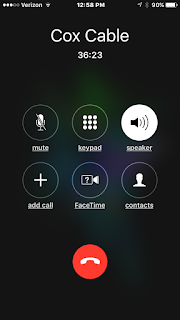 to tell me "I'd just wait and see if you actually get charged and call us back if you do."

But before we come to that highly detailed, expert advice I learned a lot. Mostly that Cox Cable's system is about as reliable as Asher brushing his teeth without being told six thousand times.

Me, being the customer who uses or does not use the service might know whether I do or do not have it. Or so you'd think. He clicks around and grunts and hmmms and tells me that I've had this service for 11 years and that the first work order for service was in 2002.

Finally he says "I don't see a work order for phone service so you're correct on that."

Oh, I'm correct on that now?  How so? Because your system says so? You mean the same system that says I've had this account, started in 2002, for 11 years? Let me convey to you the faith I have in that system.

So now we get to wait for the next bill to see if we get charged for service we do not have and then if we have, which we undoubtedly will, we'll call back, stay on hold for another 23 minutes, and hopefully at 36 minutes it will be fixed.

Except it won't be. Not really.

A Grocery Store I Don't Loathe

I hate the grocery store. And by hate, I mean I will do some highly immoral shit to avoid it. But! Whole Foods, man! And here's why... 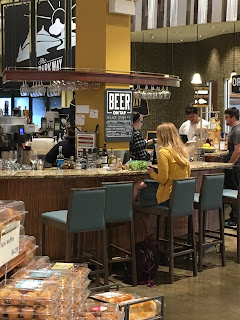 They have a freaking bar in there! Beer! Wine! Why have I not been in there before? I'd have gone daily had I known. Why would a secret like this be kept from me? I'm wrecked over it.
No comments:

Status Updates Inspired by My Guys

Aidan, 2009
"Firstaball, I need a toaster for to make some-a peanut butter samich."

Asher and Aidan 2009
Aidan is seriously crying like the world is ending because Asher took the newspaper with the weather report away from him. I keep looking for hidden cameras because really?

Aidan, 2011
Aidan apparently showed off his vocabulary and spelling skills today at school. He wrote 'ass' in chalk on the playground. So proud.

Aidan, 2013
Aidan actually uttered the words "folding clothes is woman's work". Is this kid for real???