Perhaps My Nephews Need Their Own BS Series?

Lest you think Aidan and Asher are the only little bad-asses in my family, trust me, my nephews can hold their own. Bad-ass is kind of in their blood. As children of me and my sister, the four of them really didn't stand a chance... I mean I was bad but I looked like the freakin' golden child compared to Kid Sister. Granted that was because I didn't get caught. Much. Somehow my mother believed that the screen on my bedroom window was the only screen on the whole house that just wouldn't stay put. Hmmm.

Kid Sister would do shit like go joy riding in my mom's truck and then lock the keys inside. Julyan is very much his mother's son. He's got a nasty habit of purging his feelings onto paper. And he doesn't hold back. Problem is, he signs his name to everything so there's no question as to who the culprit might be. This is what I found in a notebook after an afternoon he spent time in the corner. I believe he meant that I was a 'mutha fuckin' bitch' but that's just a guess... 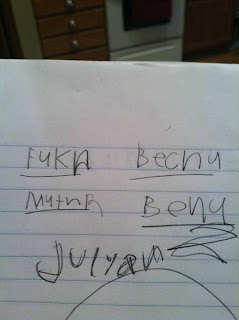 This is what he wrote for his brother's birthday 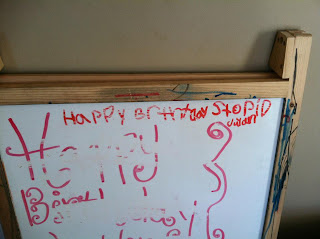 This is what he wrote about Asher 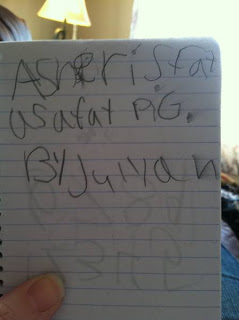 Kid Sister recently had to password protect her laptop because of his creative google searches. I'd say she's payin' for her raisin'.

I'd kill the kid rofl!