So you know how I've said many times that Aidan gets an obsession and will. not. let. it. go? We're still going through his blue period. I'm pretty sure it won't have a Picasso-esque ending. The kid has at least 15 blue T-shirts, 8 pair of blue shorts, most of his shoes have blue on them, his toothbrush is blue, he's pissed that he doesn't have blue eyes... You getting the picture I'm painting IN BLUE PAINT for you?

This week is Homecoming week so on Monday the kids wore their favorite team shirts. In what I can only describe as a moment from the Twilight Zone, he chose a *gasp* black Iowa Hawkeyes T-shirt. Tuesday they wore a color determined by their grade. Second graders were *gasp* green. He has exactly one green T-shirt and again, in a Twilight Zone moment, no problem. Wednesday was Crazy Hair and Hat day. And guess what color he wanted his hair colored. *gasp* Green.

Ha! Kidding! He chose blue. And do you think I could find blue non-permanent dye even though Halloween stuff is out in the stores and there should be dozens of colors to choose from? Oh, hell no. One big, fat, blue/silver eyeliner pencil and 3 ounces of hair gel later and I present you with my Blue Guy. The photo doesn't give you the full blue-effect but let me tell ya, he looked awesome! 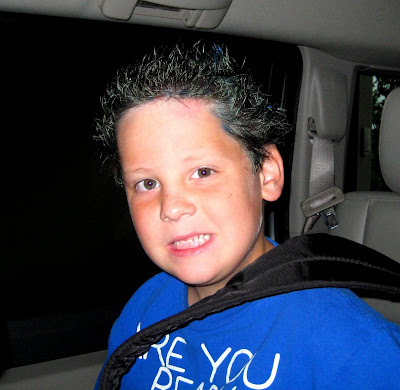 Asher chose a faux-hawk and he did love it, and rocked it if I do say so myself. 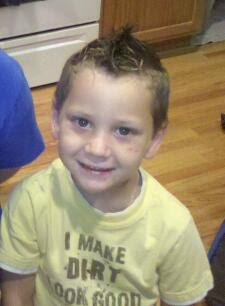