I Almost Forgot How To Blog

Stuff is happening though. I'll start catching up a little at a time.

Let's see... Okay, I'll start here - Aidan lost his first tooth just before his 7th birthday. He'd been mad as hell that he hadn't lost a tooth yet and when this one finally got loose, it hung on - or is it hanged on??? for weeks leading to him begging me to tie string to it and a doorknob and slam the door! I refused, he fumed and furiously wiggled the thing 24/7 until it FINALLY came out in his cereal one morning. I've never been so happy to see a tooth fall out in all my life. 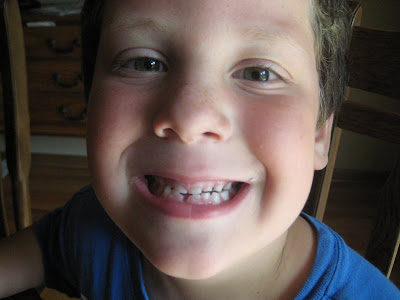 Aidan made out like a bandit for his birthday. I got him the iPod Shuffle, earphones because seriously, Apple, are there actually people whose ears hold yours?, and speakers to blare Dynamite at uncomfortable decibels. No, I'm not sure what I was thinking. Well, I was "the best mom, ever" for two days until Daddy broke out his gift. A freaking compound bow. Now, with visions of camo and bucks dancing in his head, I'm lame again. Um, fine by me, good luck keeping him quiet and still in the woods. Hee hee hee... 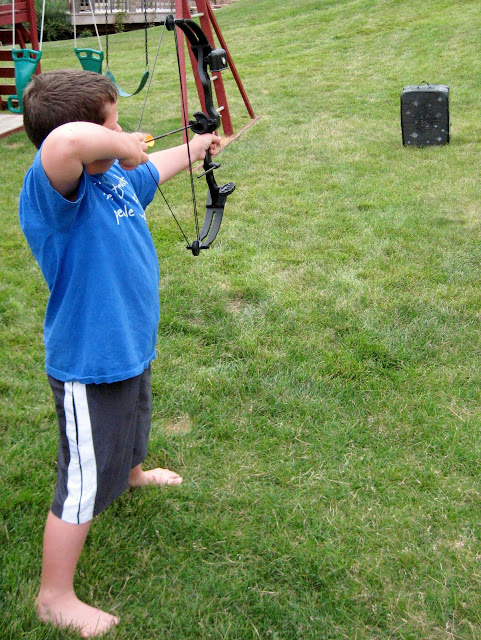 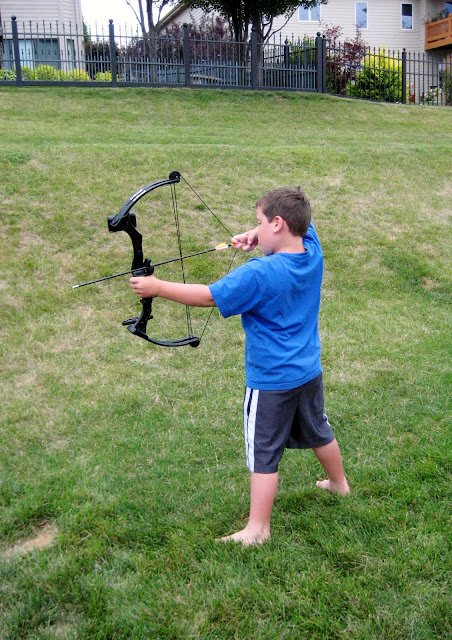 Norma and Her Toyota

My spitfire Grandma made the paper with her one woman quest to abolish the death penalty in Nebraska. 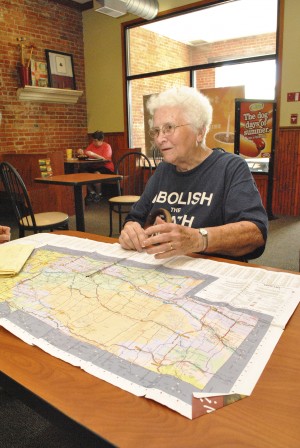 Just a quick note to remind everyone - this is not a discussion on capitol punishment, I don't need you to quote the bible for me, and for the love of my laptop, please do not get started on politics. Be respectful, this is my grandmother and if you think I lose my shit over someone screwing with my kids, sit back and watch what will happen when it comes to my grandma. I'm sharing this because she is just too cute for words. I mean, how can you not love a woman who calls herself an old bag?

from the Lincoln Journal Star...

Norma and her Toyota take on the death penalty in Nebraska

Today I took the fearsome foursome - Aidan, Asher, Jayden, and Julyan - to the zoo. Alone. I've done this before and survived and I like to live dangerously so I thought, what the hell. Pffft! What the hell is right, mkay?

First thing we head to the jungle. In there are all these fake vines, some of which drape over the walkways. I knew what was coming so I went ahead and asked an employee if the kids are or are not allowed to climb on, hang from or otherwise molest the vines. The answer? Yep, just don't let them climb out beyond the designated walk-ways, no playing Tarzan, etc... Good deal, hang loose, fellas! Aidan was just ahead of me - as he usually is - and he starts climbing onto a vine. Out of nowhere this woman right in front of him turns around and screams Get off those vines! Right now! and then proceeds to walk back to him and jerk him off of the vine.

Yes, this bitch not only yelled at my son but put her bat shit crazy hands on him RIGHT IN FRONT OF ME!!!

As best I can remember, after a split second of stunned stillness brought on by white hot rage, I got to her and pulled her by her shoulder off of Aidan. You better get your damn hands off of my son right this minute. I'll handle the parenting and discipline of my child, thank you. Now I didn't smell anything but I think she may have shit her pants at the sight of me - apparently she wasn't aware that mama bear was nearby. Well! He's not supposed to be on those! she snarled back. I looked around like Are you fucking kidding me right now? Um, actually he is allowed to be on them and even if he wasn't what the hell makes you think it's okay to yell at and grab someone else's child? Continued in my head - Like seriously, I don't know how you were raised, if your parents let random strangers man-handle and discipline you but if you want to get your ass whooped, touch my kid one. more. time.

And I spent the rest of the day seething about it. I mean, what the hell is wrong with people? The thought has crossed my mind to snatch some mean ass kid at the playground up and have words with him/her but damned if I'd ever actually do it. Not unless I wanted to start some serious shit with his/her mother. All I can say is...WTF, lady???
7 comments:

Today we had a triple birthday party for Aidan and his cousin Julyan, who share a birthday of July 12 and Kid Sister whose birthday is actually today. I could go through the whole thing blow by blow but I'm lazy so here are 693 photos of the event. Clearly everybody had a great time. Happy Birthday Aidan, Julyan, and Kid Sister!!! 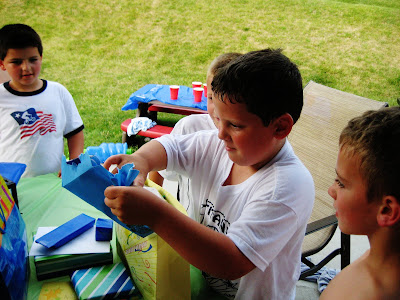 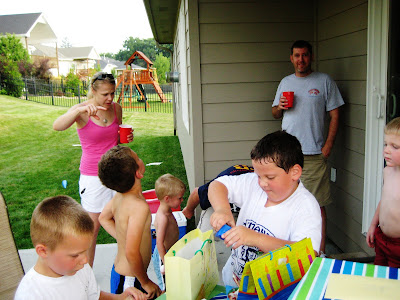 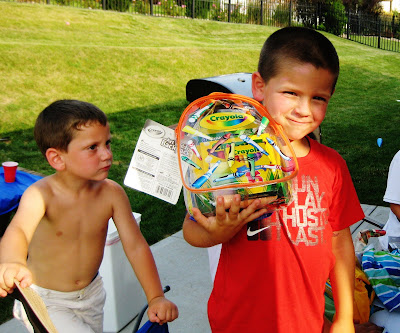 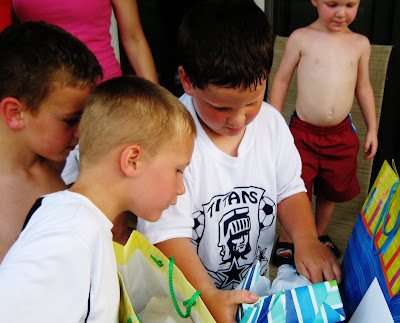 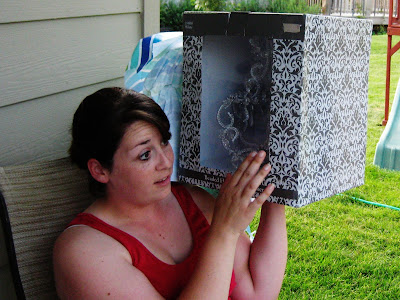 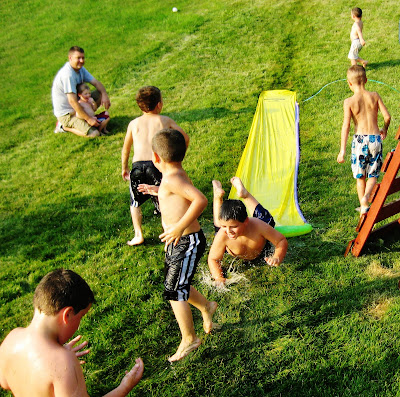 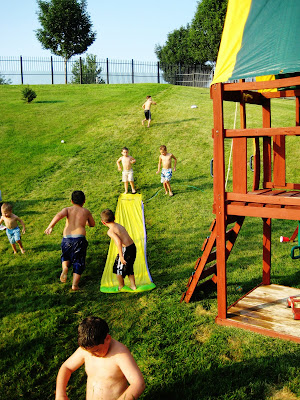 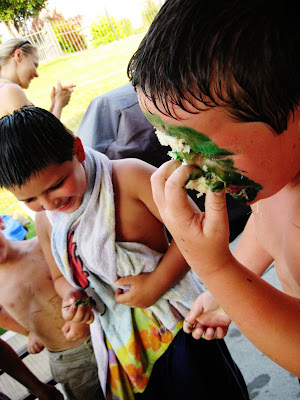 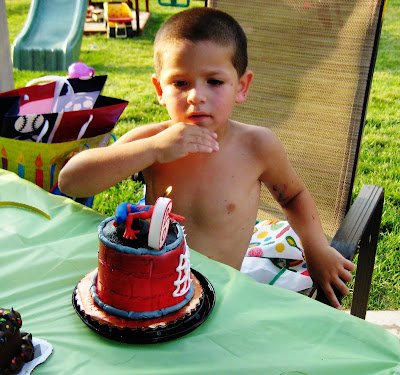 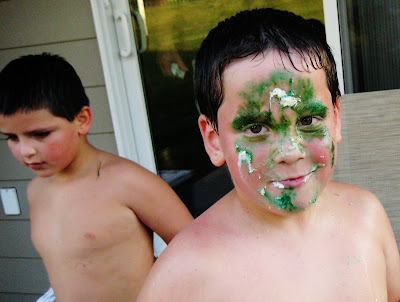 The neighbors behind us erected something along the lines of this in their backyard yesterday. 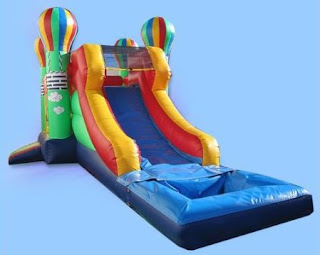 Their daughter, the two girls who live next door to us, and some random little boy were all playing on it. Jayden, Julyan, Aidan, and Asher were all lined up at the fence watching - just drooling over this thing that to them is the epitome of everything they dream of. Did the kids or the parents invite our boys to play? Um, negative. They just looked at them. I'm like Really? You're just going to let them watch? Really? I guess all that money can't buy you common decency. You suck! So now I'm hell bent to throw the most obscene birthday party for Aidan and Julyan in a couple weeks. I'm talking bounce house, water slide, batting cages, elephants... whatever it takes. And when those kids are drooling at the fence I will invite them over because even I'm not that big of an asshole.
2 comments: