Last Monday I innocently go down to the county shelter to fill out paperwork to volunteer and wound up with visions of a young female black lab named Belle dancing in my head. I'm notorious for snap decision making - the repercussions of which are epic but never-mind all that, I informed Mr about his future dog right away. He scoffed and inquired about another dog there we had seen on Petfinder - Bear. They told me that Bear was real sweet but very big and kinda rowdy and besides, he was male and we wanted a female and I only had eyes for Belle. On Wednesday I brought Aidan to the shelter and we took Belle out to play with her. I'll never admit it out loud but I had a couple flashes of "eh, something isn't so perfect anymore" that day but I'm nothing if not persistent so on Friday Mr took off work and we went to introduce him to his new dog.

He wasn't impressed and I wasn't her advocate anymore so we decided to check out Bear just to see how he 'felt'. And he basically chose us. I think I heard him say Look deeply into my eyes, you love me, you want to adopt me... We picked him up Saturday afternoon and he's curled up on the couch next to me as I type this.

Oh yes, he's on the couch. An arrangement Mr is not thrilled about but is putting up with for me. We have renamed him Brody since he was only Bear for the couple of weeks he was at the shelter and he even has a nickname - Blockhead - via the my husband. He's a lot of what we said we didn't want - older than 2, male, and lab - and yet, he's perfect. 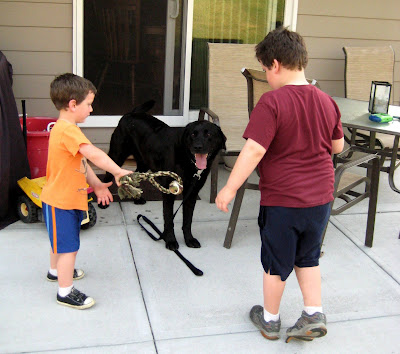 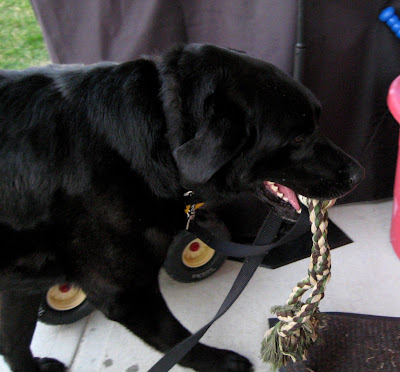 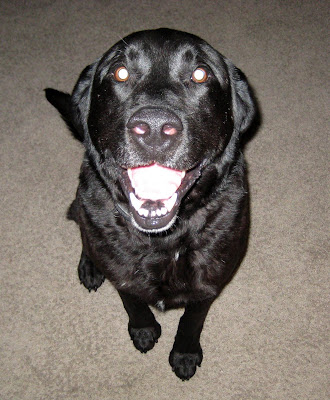 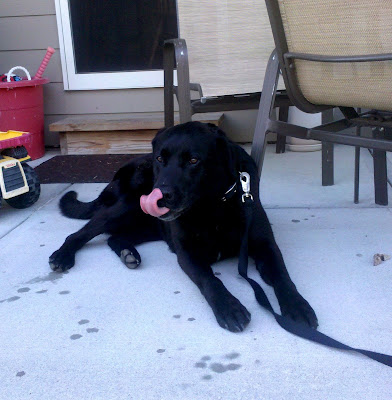 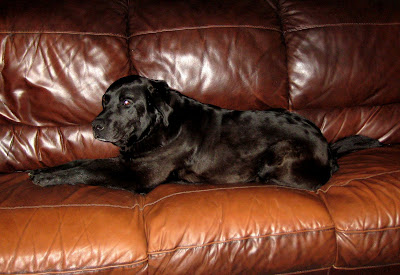 Labs are huge and dumb-acting but not *dumb* dumb, if you get my meaning, and absolutely sweet as pie. We have a black lab/blue heeler mix and we love her to pieces.

Aw! That picture where he's looking up at the camera? Looks just like my last dog Shakespeare! So cute!!!

I recently made a snap decision and got a basset for the man cuz he really wanted one...the thing adores me and won't come near the man...

Congrats on your new addition!! We too have just adopted a dog. He is a Golden and 2 years as well.
I couldn't be happier!!
Good luck with BB!!! =]
With a smile like that he will have everyone eating out of his "paw" in no time!!

He's HUGE! But so sweet. We love out labs and think they are great with the kids!

hahah his face on the couch is like "i know i shouldn't be on this couch, but no one's yelling at me" SCORE.

He is absolutely beautiful!!
Labs are wonderful with kids so I know that the boys will get along fabulously with Brody (BTW, I love the name).
I hope that everything works out great with your new family member, you really needed Brody.
HUGGLES!

Yay you! He's beautiful and I love that he's on the couch! Afterall, he is family and I have "blockheads" of the two legged version laying on my furniture all the time! :) I'm so happy for your new addition. Do you take him on runs with you? I can't even walk with my dog without turning into one of "Jerry's Kids" and my dog is only 14lbs! - Congratulations again!!

I love Labs. Great dogs. I'd like to get one if we ever have a fenced-in backyard.