Am I A Soccer Mom Now?

Aidan is done with indoor soccer and now our Saturday mornings are filled with Asher playing outdoor soccer. A couple things to keep in mind - this is a group of 2 to 3 year olds and there is a playground just beyond the soccer field. Also, most of the 'coaches' are members of the actual coach's college team - you know, childless college kids. You see where this is going?
Right out of the gate us parents had a good laugh when the coaches yell and gesture for the kids to come to one end of the field - the end where the playground is - and the whole group high tails it right past them toward the playground. Amateurs!
There is also a grove of trees along one side of the field. At any given time there were approximately 4 kids hauling ass to the grove trailed by one of the coaches begging them to come back, holding out a soccer ball like a lollipop in an attempt to lure the kids back. We parents are on the sidelines taking bets on which coach loses their shit on one of the kids first. Entertainment in it's purest form, folks.
Since the kids are so young, it's really more to get them familiar with the ball and practice stopping and kicking the ball rather than playing an actual game. Asher already knows a little more than most of the other kids so he spends a lot of time waiting for the others. He loves it though. I got a couple action shots at the first 'game'. 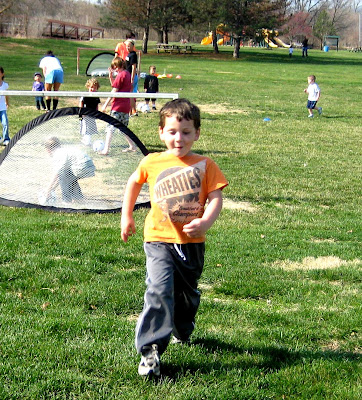 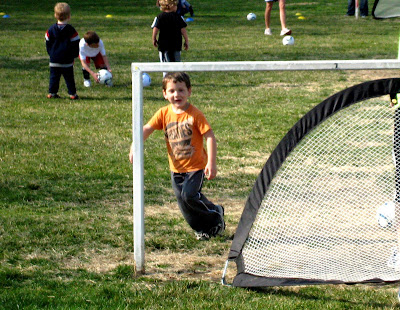 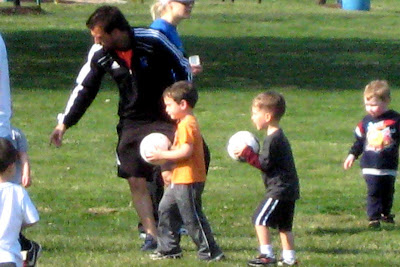 All you need now is the minivan!

if the young coaches are hot this whole story would be PERFECTION.

That's hysterical about the playground. Funny! I wish I could watch him play.

Haha! I can totally see you all sitting there cracking up while the college kids are sweating it up out there!
I loved watching Rocker Son "play soccer" when he was four. It was just a mass herd of kids running from one end of the field to the other with no clue why!

OH, he looks so adorable! Look at him go...
Gee, I feel sorry for those poor coaches. HaHa!

First, Asher looks adorable. :)
Second, who the hell does anything with 2-3 yr. olds next to a playground??? My grandson takes FOREVER to eat his meals. (He'd rather be up and running around of course.) So my husband puts candy bars ON THE TABLE, WITHIN REACH OF A 4 YR. OLD and says, very gently, very calmly, "When you get done eating you can have your candy bars." AND THEN HE WALKS OUT OF THE DINING ROOM!! Talk about amateur.. (rolls eyes) :p